Today I was thinking of my younger sister, Terri, who lives in Wisconsin.  It has been such a long time since I last saw her.  We keep in sporadic touch so I decided that I was going to start sending her a card a month to let her know I'm thinking of her.  She loves purple so I used a lot of purple tones on the card.

With the deadline for Timeless Tuesday at Flourishes looming, I added a doily which was the focus of the challenge.  To find out all the particulars, click HERE.  It will take you right to the Timeless Tuesday #234 - Dainty Doilies challenge.  You still have time to enter, too!

I had a lot of fun making this card.  I used the Garden Fairy stamp set I won from Flourishes as part of the July release.  It is a beautiful set and the first time I've had a chance to use it..  I also used the Silhouette SD that I won at work for an employee contest.  I am having so much fun with it, too.  I discovered that all of the stamp sets I won from Flourishes have cut files so I just had to have them.  I cut the image, stamped and colored it.  So cool to not have to fussy cut it since I'm not so good at the intricate cutting these days.  When I was coloring the image, I realized I didn't have any flesh tone Copic markers nor anything that would work for the wings of the fairy.  So, out came the colored pencils and Smooch.  I used my peach pencil for the touch of skin tone.  For the wings I used a periwinkle and covered it with Smooch to add a little shimmer.  I think my sister is going to love it! 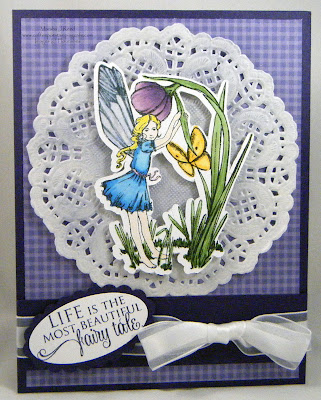 The doily is actually white but I sponge some Concord Crush ink on it to take the brightness away.  It was a perfect back drop for this little fairy.