The sun may be shining at the moment but apparently we are supposed to have another round of thunderstorms this afternoon.  I just hope it holds off until I get home from the Taylored Expressions Studio Anniversary Party.  It's been two years now that she opened the studio and I take a class whenever I get the chance to do so.  Tonight's treasure is the cupcake stamp and die combo that I'll come home with for attending the event.  It should be a lot of fun! 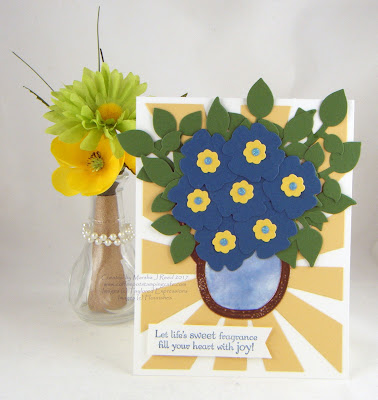 The inspiration for my design came from the Just Add Ink Challenge.  The inspiration photo was so pretty and I loved the copper vase.  To give my vase (Pitcher Vase Dies by Taylored Expressions) a coppery look, I covered the die-cut with VersaMark then used Copper Embossing Powder.  The center of the vase was done using Faded Jeans Oxide Ink on the cut out center of the vase to give it the look of water.  I layered the vase, flowers (Bloomers 4 Dies by Taylored Expressions) and greenery (Leafy Branches by Taylored Expressions) on a die cut made using the Sunburst Thinlits Die from Stampin' Up!  The sentiment is from the retired Botanical Bookplates stamp set by Flourishes and stamped using Dapper Denim ink by Stampin' Up!  For the finishing touch, I added the little die cut center and put a drop of White Blizzard Glitter Drops by Nuvo in the center of each flower. 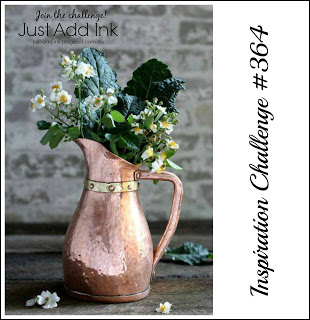 So glad you stopped by the Coffee Pot Stamping Cafe,

Marsha
Posted by Marsha Reed at 09:08